The Commission Work Programme for the coming year focuses squarely on delivery of the 10 priorities outlined in the Political Guidelines in order to address the biggest challenges which Europe faces today.

On the basis of the Work Programme, the Commission, European Parliament and Council will now work on a Joint Declaration on commonly agreed objectives and priorities for 2017, to swiftly turn proposals into action and bring concrete results for citizens.

President Jean-Claude Juncker said: “We are focusing on the things that matter, concrete actions that improve people’s lives. With the 60th Anniversary of the Rome Treaties coming up next March, we must unite around a positive agenda. This is what the Commission’s Work Programme is about. In the comings weeks I will – together with the European Parliament and Council – select a number of initiatives of major political importance that should receive priority treatment in the legislative process in the months to come. This is the Europe that delivers.”

First Vice-President Frans Timmermans said: “In this challenging era, we must work harder together and help to protect, empower and defend Europe’s citizens. To that end this Commission has set clear and focused priorities since day one. We have listened carefully to the European Parliament, the Council, and the citizens for whom we work. We have made sound progress on challenges like boosting investment and employment, managing migration and advancing on climate change and the fight against terrorism. But there is still more to do and this year we must deliver agreements on the many crucial proposals already on the table. Now we must all deliver.”

This year’s Work Programme proposes 21 key initiatives (see Annex to press release), as well as a further 18 REFIT proposals to improve the quality of existing EU legislation and ensure our rules are fit for purpose. To ensure a focus on delivery, the Commission Work Programme identifies 34 priority pending proposals we have made in the past two years where swift adoption by the Parliament and Council can make a tangible impact on the ground.

A Commission focused on the important things

From the start of our mandate, this Commission has set its priorities to focus on the big things, where effective European action can make a concrete difference. Over the last year, sharing these priorities with the European Parliament and the Council, we have made solid progress in key areas. We have delivered results across the 10 priorities. This Work Programme now sets out concrete proposals for the year ahead, which form the Commission’s contribution to the process of preparation for the 60th anniversary of the Treaties of Rome in March 2017. We will be working closely with the European Parliament and Council to make sure that our proposals are adopted swiftly.

We will continue our work across the 10 priorities through 21 new initiatives: 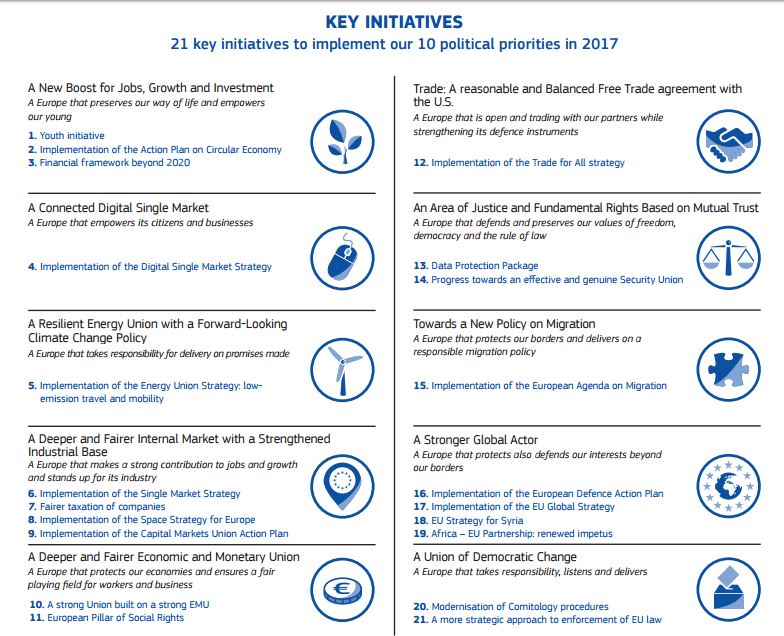 This year we are proposing 19 withdrawals of pending legislative proposals which have become outdated, and we will repeal 16 pieces of existing legislation which have become obsolete. We will also step up our efforts on the enforcement agenda across a range of policy areas including the single market and the environment, because even the best law is useless unless it delivers real results on the ground.

Many of the key initiatives we will present in the next year follow regulatory fitness and performance reviews (REFIT) and will update and improve existing legislation so it continues to achieve its objectives effectively and without undue burdens. In setting our priorities, we have taken particular account of the 22 Opinions delivered by the REFIT Platform, the newly-created independent panel of experts which reviews existing legislation and draws on citizens’ and stakeholders’ suggestions for reducing the administrative and financial burden of EU law. In parallel to this Work Programme, we are publishing a Scoreboard which sets out in detail the follow up to the REFIT Platform opinions and the state of play on 231 initiatives for simplifying and reducing administrative burdens in existing legislation.

Every year, the Commission adopts a Work Programme setting out the list of actions it will take in the coming twelve months. The Work Programme informs the public and the co-legislators of our political commitments to present new initiatives, withdraw pending proposals and review existing EU legislation. It does not cover the ongoing work of the Commission to implement its role as Guardian of the Treaties and enforce existing legislation or the regular initiatives that the Commission adopts every year.

The Commission’s preparation of the 2017 Work Programme has been enriched by consultations with the European Parliament and Council in the context of the new Inter-institutional Agreement on Better Law-Making and based on the Letter of Intent sent by President Juncker and First Vice-President Timmermans on 14 September after the President’s State of the European Union address.

Q&A on the 2017 Commission Work Programme

Communication on the 2017 Commission Work Programme